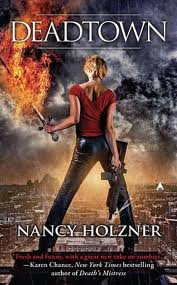 Deadtown, by Nancy Holzner, is not a traditional zombie novel. The heroine, Victory Vaughn, is a shapeshifting demon slayer, not a zombie killer, and the zombies in this fast paced novel live in the confines of a walled-in portion of Boston called Deadtown.

In the world of Victory Vaughn, zombies don’t crave brains, they crave food, especially sugary treats. Twinkies, donuts, and ice cream are consumed in massive quantities and, because they’re zombies, there’s no problem with weight gain. Zombies also aren’t condemned to wander alone until some stray human kills them. Instead they legally live in Designated Area 1, nicknamed Deadtown, with all of the other paranormals, including vampires, werewolves, and demi demons. Deadtown residents can only leave the confines of their neighborhood as long as they have a permit. Caught outside Deadtown without a permit? Not good

The story takes place three years after a virus hits downtown Boston and instantly kills two thousand people in a couple of block radius. Three days later the dead rise and the world is introduced to actual zombies. The immediate joy of having a loved one return from the dead is eventually replaced by the realization that the loved ones are different.

“Their skin was a funny shade of greenish-gray, their movements stiff. They avoided sunlight and spent nights wide-awake. Their superhuman strength and insatiable hunger made them as terrifying as the zombies in any horror flick. And then there was the little problem of blood – the smell of fresh-spilt human blood sent them into a frenzy of hunger. You could calm them down with any kind of food, but the bloodlust did make things awkward sometimes.” Deadtown

Victory Vaughn takes teenage zombie Tina under her wing, rescuing her from the monotony of the group home she lives in and the pain of having parents that want to forget her. Throughout the novel, Tina’s teenage emotions,  tremendous strength,  and voracious appetite, make for an unpredictable combination. As much as Victory wants to be a big sister to this troubled teen, she has other problems to tend to, including a Hellion that threatens to destroy all of Boston.

Deadtown is a great, fun read with exciting characters. Best of all, it shows zombies as more than cardboard cutouts intent on eating brains. Tina the teenage zombie is a feisty character that mirrors the capabilities of real-life zombie kids instead of relying on the stereotypes of the past.  A must-read for our zombie teens.