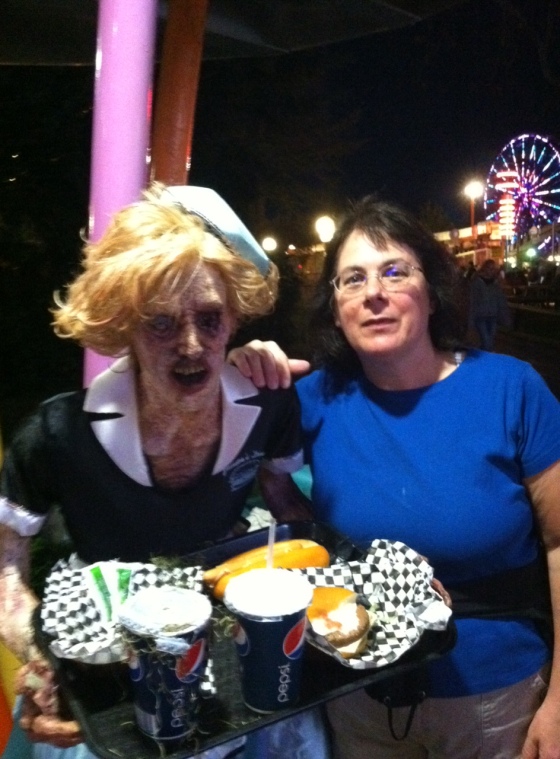 One of the most persistent and popular questions we get at the Zombie Emergency Relief Organization (Z.E.R.O.)  is “why do you only feed zombie kids? Aren’t zombie adults worthy of the same treatment?”

At the beginning of the outbreak, many sought to capitalize on the seemingly limitless supply of zombies being created. The Republicans envisioned a non-union zombie workforce able to replace migrant workers and add to the tax base. In their employment scheme, humans would capture and train zombies to do manual labor and zombie wages would be paid to the “owner” and taxed at a lower rate. The Democrats proposed the government “own” all zombies, capture and train them at the taxpayer’s expense, and put them to work doing menial work, such as stuffing envelopes, manning post offices, and verifying the census. As expected, the Libertarians proposed quarantining the infected in Alaska and letting them figure out what to do on their own.

While the debate raged on, some took advantage of the lack of  regulation to capture zombies and put them into service as domestic workers. An early adopter,  Mitt Romney staffed his New Hampshire vacation home with a largely zombie staff of cooks, maids, and groundskeepers. Convinced of his ability to keep the zombie staff under control, and his guests safe, Mitt hosted a Fourth of July barbecue and invited his top volunteers and donors. Unfortunately, Mitt’s control of the zombies proved elusive.

Prior to the event high dose tranquilizers and muzzles kept his zombie staff subservient, but in order to have a successful barbecue, he needed to portray the zombies as harmless. His decision to remove the muzzles and scale back on the tranquilizers had tragic consequences for 105 of the 500 invitees.

When the zombies attacked, the Romney supporters least able to defend themselves or flee (the aged, the infirm, the inebriated) became zombie food, and then became zombies. A federal investigation into the incident blamed the physical size of the zombies (most of them topped 5’5″ and weighed upwards of 185 pounds) and noted “if the incident had involved zombie children rather than adults, many of the victims would have had a fighting chance.”  The report’s conclusions led political leaders to abandon plans to monetize the zombie population and saw the passage of a bipartisan bill to “kill on sight all zombies, male and female, above the age of 18.”

This made it not only illegal to shelter and nurture adult zombies, but also provided our organization with the legal loophole to continue our operations – feeding and sheltering zombies 17 years old and younger. Our child zombies are rendered harmless due to a combination of selective malnutrition and our unique hobbling system which, when combined with the zombies naturally ataxic gait, guarantees even a human toddler can outrun one of our zombie kids.

Next time you make a donation to our organization, rest easy knowing you are not only doing the right thing, but you’re also protecting the human race. Be a hero for Z.E.R.O.  We’re looking for a handout, not your hand.