Opening a second facility and dealing with internet craziness  has resulted in our backing off on our usual posting schedule and concentrating on daily operations. Luckily, the one thing we haven’t stopped doing is reading zombie fiction. Today we not only post Book Review Friday on a Sunday, we also give you a two-fer as we review Eloise J Knapp’s The Undead Situation and The Undead Haze.  Enjoy!

The Undead Situation by Eloise J Knapp
Cyrus V Sinclair doesn’t mind the zombie apocalypse. He’s got a crate of Guns and Ammo magazines, a well stocked pantry, and a bird’s-eye view of the chaos from his Seattle apartment. But when the chaos winds down, the magazine articles get repetitive, and Cyrus’ sweet tooth starts acting up, it’s time to enter the fray. Searching for his survivalist pal, Frank, and joined by a motley crew of survivors, Cyrus needs to dodge the zombies and avoid the crazies – survivors who have turned to religious fervor, cannibalism, raping and pillaging – to find safety.
Cyrus isn’t your typical leader. He’s cold, he’s cruel, and he’s a self admitted sociopath. When he isn’t hanging his pals out apartment windows by their feet or abandoning them to a zombie feast, he dispatches the crazies and the zombies with equal glee. The only warmth in his cold, two-sizes-too-small heart belongs to his albino ferret, Pickle and his allegiance to his friend, Frank.
Despite his cruelty, Cyrus is an interesting, almost charming protagonist. He’s like the misogynistic frat boy or arrogant asshole who you can’t stand but still hang out with at a party. Turns out,  there isn’t a lot of room for compassion when undead zombies roam the city and, despite his faults, Cyrus manages to keep himself better off than the Mother Theresa types.
The Undead Situation takes longer to get into than most zombie fare. Cyrus’ personality coupled with a slow start make the first couple of chapters difficult to engage with, but once the action starts, it’s nonstop to the end. In fact, I flew through this novel and went straight onto the second book of Cyrus V Sinclair’s story. 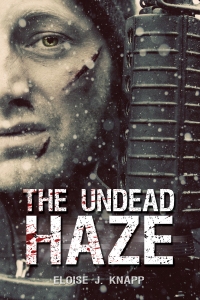 The Undead Haze by Eloise J Knapp
Cyrus V Sinclair should be in the clear. Sure, he lost his best friend, his protegé, and the only woman he considers his equal but he’s found Frank’s safe house. Pickle and Cyrus would be set if he could just forget the past. Instead his nightmares force him back into the zombie infested towns and cities in search of Blaze, the woman he left for dead.
To say Cyrus has had a change of heart in the sequel to The Undead Situation would be giving him too much credit. Sure, Cyrus is questioning himself: Was he ever truly a sociopath? Does he really want to help the survivors avoid the crazies? Is his search for Blaze something more than missing a friend? Luckily none of his questions undermine his basic self-preservation skills and weaklings be damned if they come between Cyrus and his survival.
If you enjoyed The Undead Situation as I did, The Undead Haze is a fantastic follow-up. The plot is more streamlined in the second novel and a whole new batch of crazies is introduced.  When I was done, I wanted more and am hoping there’s a third novel in the works.
The Undead Situation and The Undead Haze are available at Amazon. Now stop wasting time, go buy them.